At the final 2013 Five Corners Board of Directors meeting in December, Keiji Asakura of the planning and urban design firm, Asakura Robinson, presented the completed Environmental Design Master Plan for the District.

The plan, which Asakura described as “consistent, legible, and easy to maintain,” would cost a total of $15 to $22 million to implement, covering branding, commercial development, parks and green spaces, pedestrian and bike trails, street connectivity, and access to Sims Bayou.

Visibility and branding would be addressed in the form of larger street signs at 24 major intersections or highways and smaller signs in 150 secondary intersections. 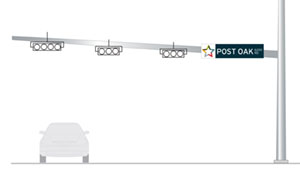 Branding plates would encourage subdivision developers to keep signage cohesive with the District branding. Directional signs, identifiers, gateway, and pavement markers would be placed at locations targeted for streetscape improvements.

Those targeted streetscape improvements would mark the points where major thoroughfares cross into Five Corners as “district gateways,” the plan outlines.

Seven key intersections would be highlighted to create “a quality public realm for businesses and residents.”

Increasing and improving pedestrian and bicycle access throughout the District would reduce residents’ reliance on automobiles and connect neighborhoods to work, school, transit, retail and recreational amenities, according to the report. A District-wide “Safe Routes to Schools” program would support schools that are interested in participating.

The Master Plan includes enhancements to existing parks with adequate signage, lighting, and park amenities. It also addresses the possibility of acquiring land along Sims Bayou for more parks and open space with future development opportunities.

“Pedestrian and bike access is a key component in keeping the community safe and is a wonderful environmental initiative,”
— Keiji Asakura

Eight access points to the bayou were proposed: Hillcroft, Chimney Rock, Croquet Street, Stancliff Street, White Heather Drive, Buffalo Speedway, Almeda Road, and Kirby Drive, each at an estimated budget of $220,000 to $350,000. This would include signage, pavement markers, lighting, furnishings, and landscaping for each access point.

It also recommends the development of large-scale commercial business sectors along Beltway 8, SH-288 and South Main Street (US-90A). A developer and land assemblage for a town center near Sims Bayou was also recommended in the plan.

The Board of Directors accepted the plan for further discussion on how to set priorities and fund implementation of the plan.