It was May 1994 when Freddie Robinson decided to launch his own business on a patch of empty land in the 14600 block of South Post Oak.

“We were literally in the dirt,” said Robinson, who had previously worked for Reynolds Aluminum Recycling. A building was erected, then several additions were made, and the business of recycling non-ferrous metals and electronics began to thrive. Now, the success of the South Post Oak Recycling Center has led to a second location on Holmes Road.

It’s a family business which Robinson expects to pass along to the next generation when he gets ready to retire. He and his wife, Angela, have three grown daughters: Brandi, Jasmine, and Adia.

Brandi Harlow had gone to California for graduate studies and was on an upward career path with well-known companies in the entertainment, retail, and aerospace industries before returning to Houston this past spring. Poised to take over some of the responsibility from her father, she is avidly learning about the business of buying and selling metals for recycling. 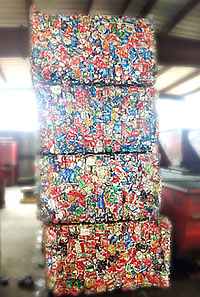 The company buys and processes several hundred tons of aluminum cans, window frames, gutters, batteries, copper wire, computers, cell phones, and other salvageable metal materials each year, she said. However, they do not handle paper, plastics, or glass. Metal recycling is a lucrative niche business where the market is rapidly shrinking as other competitors realize the potential and jump onboard, she added.

Customers include local residents looking for a little bit of pocket cash in exchange for their soda cans, plumbers and contractors turning in construction salvage, and commercial and industrial clients like machine shops, Harlow said. Materials are re-sold to foundries and smelters, she added. “The business has an excellent impact on the local community economically,” said Robinson.

Residents can bring their materials to the center and receive much needed cash on the spot (a boon during the downturn of the economy from 2008 to 2012). Sometimes, it provides quick money for gasoline or diapers, he added, and some regular customers even build an annual Christmas fund from their recycling savings.

Occasionally, people bring in unusual metal items, like the life-size pair of brass ducks that the Robinsons “recycled” into their office decor. Copper ornaments, pots and vases also show up at their facility, but Robinson is quick to point out that it is illegal to accept any funereal items. Cameras in the warehouse record transactions, and legal documents help ensure that all materials bought from the public are legitimately theirs to sell, his daughter explained.

The Robinsons plan to honor their 20-year anniversary by giving little gifts to their customers throughout 2014, but are mulling the possibility of a big shindig in May, an event where the community can come and help them celebrate.