Melva Thornton, chairwoman of the Five Corner’s Management District’s Environmental and Urban Design Committee, is pleased with the improvements spearheaded by her committee over the past year.

[blockquote]“We are just trying to make improvements overall so we can attract businesses who want to settle here.”
— Melva Thornton, Environmental and Urban Design Committee Chairwoman[/blockquote]

“We’ve continued to keep the community clean by using our de-litter crew and have looked at expanding the number of streets that we de-litter. We haven’t added any streets as yet, but that’s something we hope to achieve this coming year, budget permitting.”

“Our signage was one of the highlights of the year. We were able to get our signs up in ten exterior locations and twelve inside the District. We’ve gotten very positive reviews of the signage.”

People have come into the District from out of town and remarked appreciatively that it was big enough to see, readable, and something they would like to see in their own city, she said.

“Overall, the signage has people asking questions about Five Corners, more than they have asked before,” she said, adding that the board members are always happy to answer questions and have conversations about what’s going on in Five Corners. “The signs are definitely attracting attention.” 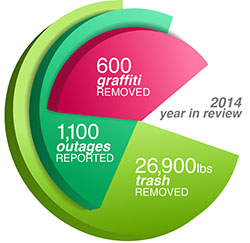 Five Corners is also working on a tree-planting event with District K, Council Man Green’s office. “A lot of greenery will be coming to Five Corners, like up and down Hiram Clarke where there are no trees. Those are probably things that people probably don’t associate with Five Corners, but that’s Five Corners at its finest; trying to put those kinds of things back into the community.”

Looking ahead to 2015, Thornton said there have been discussions about curb repairs and painting at street corners and esplanades where turning trucks have done some damage. Two intersections, Hiram Clarke at W. Fuqua, and South Post Oak at Orem, have been earmarked for striping and improvements during the first quarter of 2015. A dedication ceremony is in the planning stages, too.

“We’re also looking at a possible collaboration with TIRZ 25 on some beautification projects. A lot of streets in Five Corners definitely need to be overhauled, and we need to work on our internal infrastructure.” 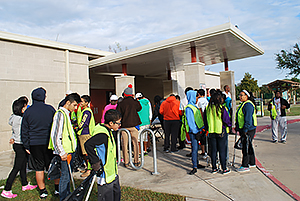