Skip to content
Home/Community, Economic Development/Fast Food You Should “Check” Out
Previous Next

Fast Food You Should “Check” Out 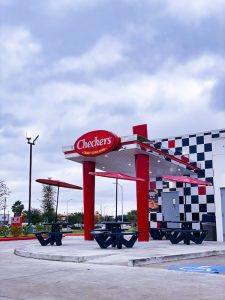 Maybe it’s because Checkers was my number one after-school snack stop as a child, the fast food that my brother and I would beg our mother to stop for before returning home. Maybe it’s the crispiness and addictive saltiness of the fries, or the creaminess of the mayo-ketchup on that perfectly sized Rally Burger with cheese. No matter what the reason, Checkers, also known as Rally’s, holds a special place in the decadent part of my heart, where all the best foods belong.

As of March 2019, the Five Corners District has been graced with its own Checkers, which serves quality burgers, standing up to any competitor, along with fries that clearly dominate the fry scene.
“Checkers” aptly describes the style of the restaurant, as its style blends checkered racecar flags with a red and chrome 50’s drive-in look.

This fast food chain has been around for 35 years now, first as two separate corporations (Rally’s and Checkers) which merged into one entity. You can now find at least one Checkers in about half of the states in America, though the states with the highest amount of Checkers franchises are Florida, Georgia, Michigan, and New York. Texas currently has 25 total restaurants, with 16 of them in the Houston area. 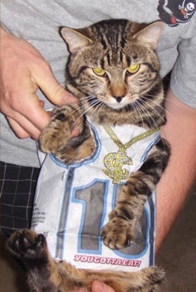 Though fast food commercials are rarely memorable, Checkers became a viral YouTube sensation in 2007 when they developed a rather unique character for a commercial: Rap Cat. This stuffed-animal marionette sporting a gold chain starred in a unique rap-video commercial along with his backup dancers, filmed in front of a Checkers. Rap Cat makes frequent wardrobe and accessory changes throughout the video, from a red hoodie, to a silver dollar sign necklace, to a basketball jersey, oversized sunglasses, and more (clearly) high-dollar attire. Though the resolution is low, this is almost a historic YouTube gem that you have to see to believe.

With the popularity of Rap Cat, Checkers jumped on the opportunity to build on their feline’s fame. They re-designed their paper bags to look like a basketball jersey, with circles that could be cut out to create arm holes in the bag. Was this intended for human use? Think again. With these bags, cat-owners who ate at Checkers began transforming their pets into real, in-the-flesh, rap cats.

Whether you decided to eat at Checkers because of Rap Cat or not, your first time was doubtlessly the beginning of a long-time fixation. Once you’ve tried their famous seasoned fries, it’s difficult to go back to traditional yellow fries with salt. These skinny fries are the perfect combination of fried and crispy on the outside, soft in the middle, with a signature seasoning to give them a distinctive flavor. If it’s your first time at Checkers, start with the fries. Once you’re hooked, you can get the Fry Lovers XL box of fries. The description for this size warns, “Things are getting serious.” And they’re right. You can find the nutrition facts for each item on the Checkers website – but why do that to yourself?

Pulling through the Checkers drive through on Post Oak, I was greeted and served with a Chick-Fil-A level of friendliness and customer service. The turnaround time was quick, and I was asked to have a blessed day as my fresh food was handed through my window. And with a Rally Burger with cheese, seasoned fries and a Coke, I indeed had a blessed day.