Skip to content
Home/Community, Economic Development/2020: Year of the Golden Chick?
Previous Next 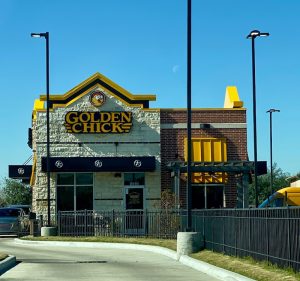 For Houstonians accustomed to having a Popeyes a stone’s throw away, driving past one of the city’s five Golden Chick locations may not ring bells of familiarity. All five of these fried chicken franchises are in close proximity to the Sam Houston Tollway, so those not living in those specific areas may not have ever paid much attention to these restaurants. Regardless, the Five Corners District is lucky enough to be home to one of these locations, at the corner of W Orem and Post Oak. And I’m here to tell you that even if you don’t live in the neighborhood, “golden tenders” are worth going out of your way for.

The menu at the Golden Chick drive-through is simple. Fried chicken comes in the form of the classic “golden tenders,” either on their own or inside a sandwich. Traditional fried chicken, or the “golden roast” style chicken are the staples of the menu. The other two options are strips of fried catfish, or a chicken salad sandwich. Southern-style sides include the typical French fries and mashed potatoes, though they are overshadowed by tidbits of fried okra, exceedingly creamy mac and cheese, and potato salad.

This was my first experience ordering fried okra at a fast food restaurant, and I was excited to see how the Golden Chick version of this deep South favorite measured up. With the recent spicy chicken sandwich craze centered around Popeyes and Chick-fil-A, I decided that it would be timely to order Golden Chick’s rendition. As a meal with a soft drink, those items cost about $7. But I didn’t stop there, because how could I possibly pass up the mac & cheese? This, of course, turned out to be a delicious decision. 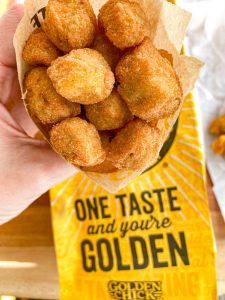 After waiting for a few minutes for my food to be passed through the drive-through window, I eagerly peeked into my bag of good-smelling delights. The first thing I noticed was the fried okra bits overflowing from the paper sac that they were meant to be contained in: a good problem to have. Although the breading was a little more firm than fried okra that I’ve had in the past, popping them into my mouth one after another became an addicting habit. But with so many of them populating my bag, I was not able to finish the whole serving — especially with the “golden tender” sandwich stealing the show.

Pulling the spicy “golden tender” sandwich out of its sac, its appearance was initially underwhelming. Breaded chicken tips poked out from in between the flat buns. Red seasoning was apparently shaken onto the chicken, and the BBQ sauce (that I specified) was hidden in the depths of the moderately-sized sandwich. But there a promising sign was the absence of lettuce, tomatoes, cheese, or any other unnecessary stuffings. Just chicken and bun: a sign that these two basics are good enough on their own.

And it was true. Taking a first bite of the sandwich, my doubts were immediately erased, and replaced with stunned satisfaction. These were clearly the best chicken tenders that I’d ever purchased. I felt as though I’d crawled out from under a rock where people unknowingly eat over-cooked, stale chicken tenders, and entered a world of soft, juicy perfection. The sweet bun made for a great tool for eating the chicken tenders, but next time (undoubtedly soon) I will simply order the tenders rather than the sandwich. 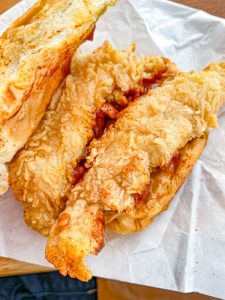 Part of the reason Golden Chick might not have the widespread recognition that it deserves is that although it was established in West Texas in the 1960’s, it is a newcomer to the Houston area. However, next year, this may change. 2020 may be a “golden” year for Golden Chick in Houston, as businessman James Griffith recently purchased the rights to 55 Golden Chick franchise locations, according to fast food magazine QSR.

With Golden Chick quite possibly becoming a new chicken destination in the Bayou City, stopping by the year-old Five Corners location will allow you to say “I knew it when.” And trust me, you won’t regret it.