Houston City Councilman Larry Green of District K has reported several events and initiatives that will benefit the residents of the Five Corners District—both economically and culturally. 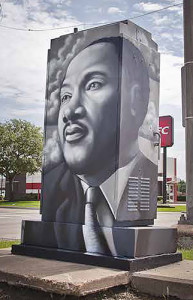 Green said that Hines Interests is already in discussions with the TIRZ 25 about helping to fund a $65 million light manufacturing and distribution center that began this summer. Construction on Phase I of the 930,000 square-foot facility began in July on 75 acres located at the northeast corner of Beltway 8 and the Fort Bend Tollway, and will be called the Beltway Southwest Business Park. Phase I, which consists of more than 350,000 square feet includes a 240,000 square-foot cross dock building and an 110,000 squarefoot rear load building. Phase II, slated to begin construction in early 2017, will consist of more than 480,000 square feet. Overall, the facility will provide convenient access to major highways for distribution needs.

The Councilman also reported that the ground breaking for the extension of Buffalo Speedway took place on May 18, and construction should begin early next year. In a public meeting in December 2014, the City’s Public Works and Engineering Department outlined a plan to extend Buffalo Speedway as a 4-lane divided roadway with raised median, 5-foot wide sidewalks on both sides, and curbs and gutters. The project would provide access to adjacent lands and a through route from West Bellfort to Holmes Road and areas south of Holmes Road, crossing the Union Pacific Railroad.

“The curiosity about who’s doing them and who’s funding has been overwhelming. People are asking about how they can get a box with a mini mural for their organizations and taking tours around the District to look at the mini murals, which is beautiful.”

Art projects in the District are also making headlines. In June, the District unveiled the first of 31 mini-murals that will bring an artistic touch to unsightly traffic control boxes at some major intersections. Fifteen of the city’s most talented urban artists were commissioned by District K to transform the control boxes at a cost of $48,000 This unique art should help deter graffiti and save abatement costs.