Images of those iconic people and pastel objects appear throughout the 5 Corners Improvement District on more than a dozen “mini-murals” painted by professional artists onto outdoor metal traffic control boxes on esplanades and curbsides.

Mini-murals now beautify neighborhoods all across Houston. But the craze in our city started in 5 Corners and the neighboring Brays Oaks Management District.

Read why that was so — and find out much more — in these 9 Things You Need To Know About The 5 Corners Mini-Murals: 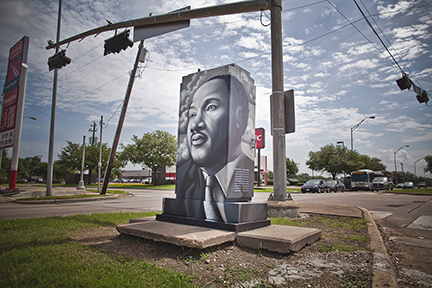 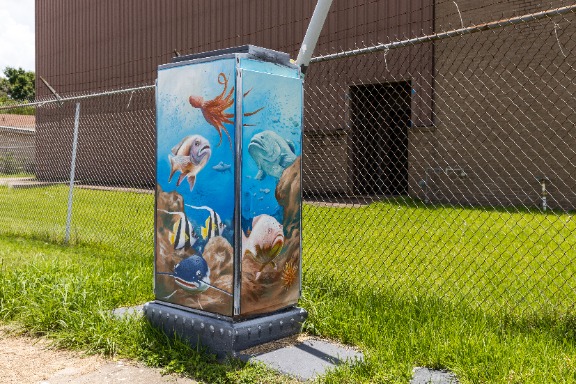 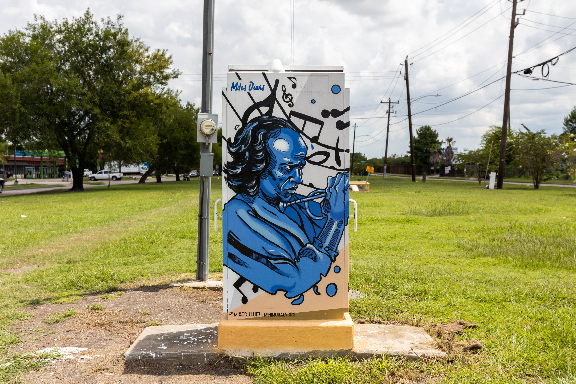 1 — Around 2015, when he was serving as District K city council member, the late Larry Green attended a municipalities conference and saw how other cities had arranged for the creation of mini-murals. He loved the public beautification idea. Coincidentally, Up Art Studio of Houston soon approached him with the idea of installing mini-murals in his district. It was a match made in heaven, as they say. Green secured city funding for the first set of mini-murals. Eventually the idea caught on throughout the city. This is all according to Elia Quiles, an Up Art Studio principal.

2 — Tax Increment Reinvestment Zones 9 and 25, which work in concert with 5 Corners District under a “tri-party agreement,” also funded Up Art Studio’s creation of the mini-murals in the District. The business hires professional artists to do the work.

3 — Click here to see a map of mini-murals and other public art installations in 5 Corners.

4 — Larry Green is portrayed on one of the boxes. It’s at South Post Oak and Allum roads.

5 — Many mini-murals in Houston reflect the character and make-up of the neighborhoods in which they are placed. In 5 Corners, where Black residents are the largest ethnic group, mini-murals portray Dr. Martin Luther King, Jr., President Obama and a member of the Buffalo Soldiers. The box showing the late Nina Simone shows other prominent, late Black singers/musicians: Count Basie, Billie Holiday and Miles Davis.

6 — Other 5 Corners mini-murals brighten up the neighborhood with paintings of flowers, plants, modern art and more.

7 — The price of designing and creating each mini-mural is about $3,000, including the application of a protective clear coating. Eventually, though, art needs to be refreshed or replaced.

9 — Keep an eye out for more art projects in 5 Corners!