Skip to content
Home/Community, My Five Corners/Natural wonders and an interracial love story at a ‘hidden’ park
Previous Next

Natural wonders and an interracial love story at a ‘hidden’ park 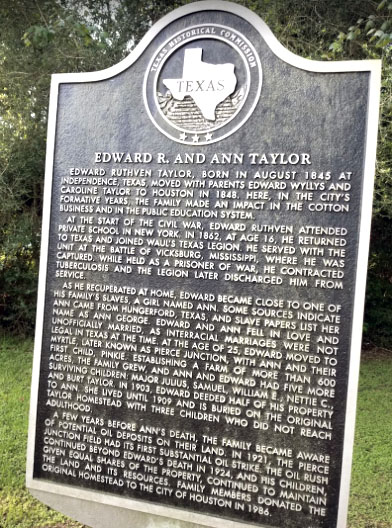 As opposed to a city like Chicago with its dozens of wooded “pocket parks,” Houston has relatively few places offering sylvan strolls through unspoiled nature on patches much smaller than showcases such as Memorial Park.

Houston parks are more likely heavily landscaped or wide open and exposed to our blazing sun; the better for them to accommodate soccer fields and softball diamonds, swimming pools and splash pads, disc golf courses, and in some cases golf golf courses.

But E.R. and Ann Taylor Park is a hidden gem of a forest park that hides in plain sight in the 5 Corners District at the corner of Reed Road and Almeda Road.

It also honors quite a story from Houston history.

Driving into the park on a gravel road from its entrance on Reed, you feel the hurly burly of the big city melt away as you go a quarter mile or so to the main parking area, where you find a medium-sized picnic shelter, offering a great spot for COVID-safe takeaway dining.

But it’s back on the trails where you can find true enchantment in the form of some of the most magnificent live oaks and other trees in Harris County; even all of Texas.

And the trees stand as worthy monuments to the park’s amazing history as a memorial to a deep and abiding interracial love story from the Civil War era, when such was both forbidden by law and downright dangerous to those in such relationships.

The story begins in 1862 when Edward Ruthven Taylor, son of a prominent Houston cotton broker and nephew of a future mayor, enlisted in Waul’s Legion of the Confederate Army. Taylor, then all of 16, was captured at the Battle of Vicksburg in 1863. While a prisoner of war, young Taylor contracted tuberculosis, and after being set free by the Federals and discharged by Waul’s Legion, Taylor came home to Houston, before war’s end, to die. (In those days, “consumption” was almost invariably fatal, though some sufferers took longer to die than others.) 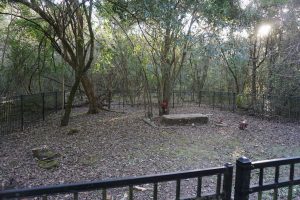 His father purchased a young slave woman named Ann — some believe she was from Hungerford TX, and that her full name was Ann George — to look after their ailing son. Either Taylor had been misdiagnosed or Ann George was a miracle worker, for Taylor lived on until 1924. Of greater certainty is the fact that he and Ann fell in love. But because interracial marriage was then illegal, they never married officially. Instead they defied both the law and social convention and simply lived as man and wife with a love unsanctified by church and uncertified by state until Ann’s death in 1909.

Perhaps due to social ostracism, the couple moved away from the heart of Houston to the site of this park in 1870, and it was here, on a 600-acre farm they established, that the couple raised six children to adulthood, all of whom went to college, and one of whom, daughter Pinkie Taylor, lived to the ripe old age of 106. (A few children who died young are buried in a plot on the grounds of the park alongside their mother; segregation caught up with the family in death, as only Edward, who died in 1924, was allowed to be buried with his white family members at Glenwood Cemetery, then as now, burial ground for Houston’s white elite).

Healthy and successful children were not to be their only blessing in life. In 1921, oil was discovered on the property, and in time it became a bountiful field, brought in by industry titan Hugh Roy Cullen and a proving ground for the revolutionary rotary rock-piercing drill bit on which the Howard Hughes fortune was built. Another portion of the old farm has become the Taylor-Stevenson Ranch, a working horse, cattle, and hay concern run by descendants, on which you can also, by appointment, visit the American Cowboy Museum, where women, African Americans and other people of color take their rightful position of prominence in the history of cattle-raising in America. 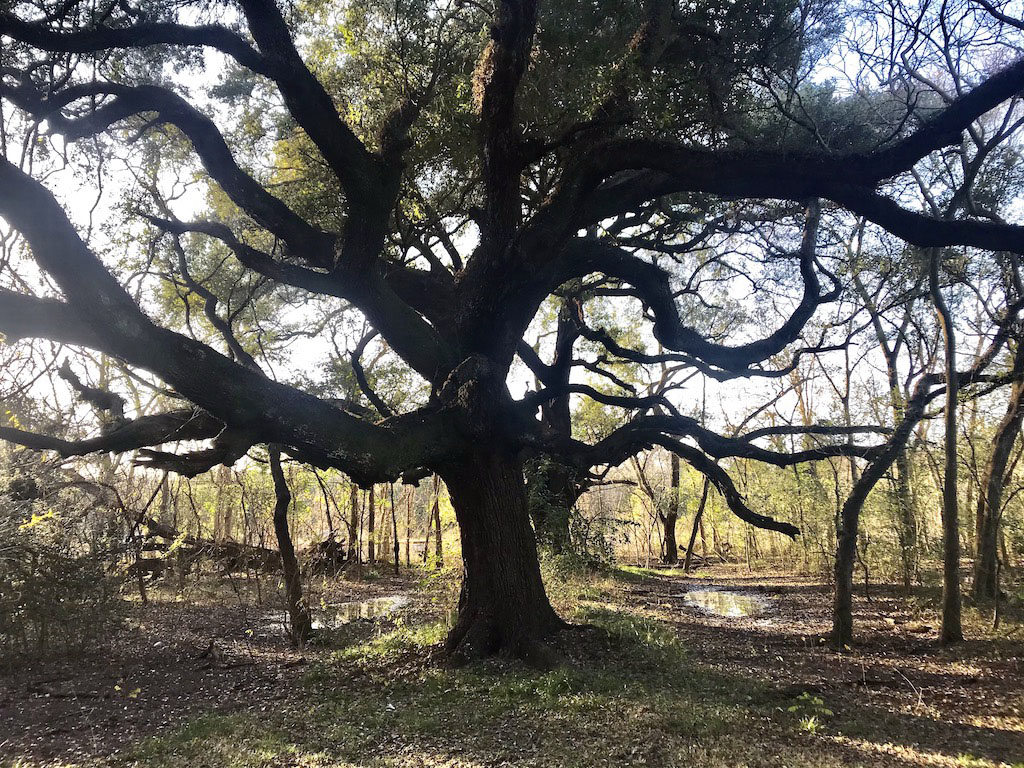 But these 26 acres were preserved from that development and remain much as they must have looked in 1870. On the mile-long trail, some of it on boardwalks in the marshier areas, hikers can enjoy a serenity hard to find in Houston proper, and see wildlife seldom encountered so close to downtown, such as herons, egrets, and red-winged blackbirds perched on swaying cat-tails in the marshes.

But for me, at least, the star attraction is a trio of some of the mightiest live oaks I’ve ever seen, standing roughly in a circle, their spreading boughs kissing, their canopies so thick little grows below.

One can only guess at their ages, but it’s almost certain they predate European-American and African-American settlement in the area, making them older than the introduction of racism to Texas and a testament to a love that transcended it.  Pictures don’t do them justice — each one of them overpowers the camera, and since they are three, well, you just have to see them for yourself.