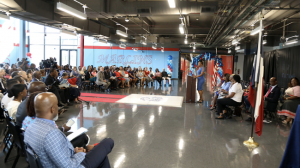 Red, white, silver, and blue balloons were artfully arranged into columns and arches alongside a bright red carpet that guided guests to the dining commons, where rows of black chairs were lined up.

The celebratory décor created a festive atmosphere for the official grand opening of the new Madison High School, built as part of the district’s 2012 Bond Program and opened to students in January 2019.

The $94 million project spans 265,000 square feet and can accommodate up to 2,100 students. Offering plenty of natural light, the two-story foyer doubles as a dining commons and large gathering space.

On Saturday, it was home to the school’s grand opening celebration and reception.

“Today is a reminder that there is no pride like Madison pride,” Interim Superintendent Dr. Grenita Lathan said. “This school has meant so much to so many of you. The physical school may be different now, but the spirit of Madison has not changed.”

Madison is one of 40 schools that is being renovated or rebuilt as part of the 2012 Bond Program. The school’s new front entrance faces West Orem Drive and is flanked by three, two-story academic wings to the east and performing arts and community spaces to the west.

The gymnasium and athletics area are in the northeast portion of the building. The swimming pool, which is under construction, will also be housed in the same area.

“This school would not be here if you had not voted,” HISD Board of Education Trustee Wanda Adams said, thanking guests for their support of the 2012 Bond. “Because of you, Madison High School stands.”

During the event, Madison Principal and Alumnus Carlotta Brown thanked audience members for coming and presented a gold time capsule, which will be buried in one of Madison’s exterior courtyards, not to be opened until 2065.

“The best is yet to come,” Brown said. “Every time I walk in, it is with a rejuvenated spirit and a strong belief that we’re making a difference in these children’s lives.”

Several dignitaries also were in attendance, including City of Houston council members Martha Castex-Tatum and David Robinson and U.S. Representative Al Green, who presented the school with a U.S. flag flown over the Capitol.

Robert Kieke — a retired Madison science teacher who taught Brown more than four decades ago — said he was proud to see his former students achieving their dreams. On Saturday, he arrived early, walking alongside a row of portraits of Madison principals, eagerly pointing out the ones he had known.

“It’s hard to see the old school go, but we have to progress,” Kieke said. “It’s a very impressive and beautiful building.”

Follow @Build_HISD on Twitter for the latest updates on the 2012 Bond Program and school construction across the district.