In 1990, 1 out of 2500 children in the United States was diagnosed with Autism. Kevin Salley was that one. “Kevin was very athletic and loved participating in Special Olympics,” said his father, Bernard Salley, a retired Houston police officer.  As Special Olympics coaches, Bernard and his wife, Delphine, came to realize just how much support the special needs children of the 5 Corners Management District needed.

The Salleys are ardent trail riders and introduced Kevin to riding early. Kevin’s love of horses led the Salleys to look into therapeutic horsemanship programs to augment the riding Kevin was doing at home.

“I’ve seen people lifted out of wheelchairs, trading their two lifeless legs for four of the most powerful legs in all of creation. I’ve listened to children who were diagnosed nonverbal speak their first words to a horse. I’ve watched children emerge from foster care and poverty with broken spirits and abused bodies and grow and flourish in the saddle,” said Jessie Mathias Reeves, Director of Worthy Stables, a therapeutic horsemanship provider in Hattiesburg, MS.

“When we found out our son was autistic we wanted something to stimulate his mind and body. Since we had horses, he learned to ride at 5 years old,” Bernard said. ”We found a couple places where there was horseback riding therapy and other activities but everyone was charging so much money.”
As Bernard and Delphine continued to search for an affordable option, Kevin brought friends from school to see the horses and watch Kevin ride. Soon those friends were asking if they could learn to ride like Kevin. 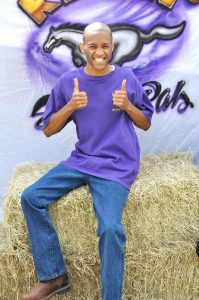 Bernard reasoned that the training police horses receive to remain steady and focused in all situations would be perfect for his horses. He was right. He asked an acquaintance from the Houston Police Mounted Division to train two of their horses in the same way the police mounts are trained.

“Some kids have never seen horses before and are afraid of the animals,” said Bernard. Quite a bit of time is spent at their facility on the southern edge of the 5 Corners Management District getting the kids comfortable with the horses. “First, a child walks the horse on a lead in our round pen. Once he is familiar and comfortable and ready, we put the child on the horse. That’s when you see the big smile on their face.”

The Salleys have been providing therapeutic horsemanship to the children of Houston for the last 11 years. Twice each year, Kevin’s Special Pals, with help from the Islamic Society of Greater Houston, the Houston Police Department and many others, has a fundraiser which is known as Kevin’s Special Pals 9th Annual Fun Fest. This year’s Fun Fest will be held April 7, 2018 from 1 to 6 p.m., starting and ending at 3800 Curly Oaks Dr., Houston, TX 77053.

More information can be obtained by emailing the coordinators at KevinsSpecialPals@yahoo.com and Bernard or Delphine Salley will be happy to respond.

The day will begin with a trail ride and parade through the 5 Corners Management District. Kevin’s Special Pals that are able to ride without assistance will ride along with volunteers. Kids that can’t ride alone will ride in horse and mule drawn wagons. The entire neighborhood comes out to cheer on the Special Pals. When the parade ends at the Salley’s facility at 3800 Anderson Road, there will be food, games, activities and exhibits including Houston Police Department K9 and mounted patrol demonstrations and a real (inoperable) helicopter for the kids to explore. The Fire Department equipment displays are always a big hit as well.

The entire community pitches in. Some folks volunteer to paint kids’ faces while others provide
ponies for pony rides or help run the activities. Some folks provide donations to help with the costs. “Brendan and Delphine are true leaders in Special Olympics and the community” said Nina Springer, 5 Corners Management District Board Member.

People are also there to help community members find services for themselves or family members with special needs. “When we found out our son was autistic, we didn’t know where to go. Now, we have somebody from the State that comes out to explain to these young families the services out there for their kids,” said Mr. Salley.

This might be the most important service that Kevin’s Special Pals offers.

“Come one time and you’ll get hooked on the smiles on those kids’ faces.”