In the humid sunshine of early October in Houston, Five Corners District residents gathered together for the annual community-building event National Night Out. Neighbors, elected officials, business members, and police officers dedicated this time to fostering connections with one another. Under the banner of “Give neighborhood crime and drugs a going away party,” the National Night Out is a nationwide event that seeks to root-out crime by developing strong relationships within communities. 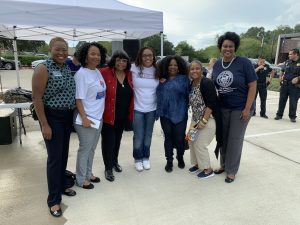 The HPD Southwest Substation organized and hosted the Five Corners District event on their property, which shares the block with Cambridge Village Park. Officer White took interested attendees on a tour of their new, $21 million police station at 13097 Nitida Street. As part of the tour of the facility, residents could survey the large community room inside the police station. Seating over 100 people, this room was intentionally designed to facilitate neighborhood meetings and groups, to further the goal of strengthening bonds between police and the people they serve and protect. HPD Captain Belinda Null commented that it was great to see the community turnout at the event, and that she was excited that it could take place at the new station this year. HPD encouraged residents to get to know the officers who are patrolling their neighborhoods, and never hesitate to communicate with them.

Businesses, nonprofits, schools and government representatives from around the community set up booths outside the police station to introduce themselves to their neighbors. Among the participants were Reve Preparatory Charter School, Fondren Elementary, Lawson Middle School, the YMCA, AVON beauty products, Woodforest Bank, and more. SEAL Security was present, as they are contracted by the district to provide extra security throughout the area, to supplement the work done by HPD. A local group called “Grandparents Support” or GPS, greeted those of us strolling by their booth and passed out information. GPS is a group of grandparents who have become primary caregivers for their grandchildren. This group supports one another through the challenges they face and sacrifices they make while raising these children. Children played ring toss, horseshoe, and played on the park’s play equipment while adults chatted.

Politicians around Houston made it a priority to attend their local Neighborhood Night Out gatherings to meet their constituents, and encourage community spirit. With another Night Out in the books, the Five Corners District will continue to promote safety, and provide avenues for public engagement throughout the upcoming year.