Skip to content
Home/Community, Events/District K Students Participate in a Weekend of Sports Events
Previous Next

District K Students Participate in a Weekend of Sports Events 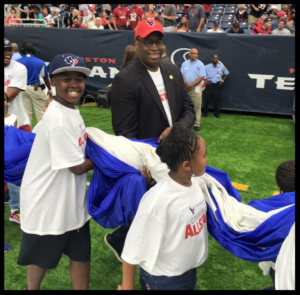 On Sunday, August 28th , over 65 students from District K participated in a Texans tradition of Flag Holding. The Flag Holders had the great opportunity of holding our Texas State Flag on-field as part of the Texans pre-game show during the playing of “Deep in the Heart of Texas”.

Council Member Green is a big supporter of the non-profit organization, World Youth Foundation, Inc. As a gesture of appreciation, District K students were able to participate in a double header for the weekend. Over 30 students from District K also attended the Houston Astros vs Tampa Bay Rays game, held at Minute Maid Park on Saturday, August 27, 2016. Thank you to Blue Cross Blue Shield for sponsoring the great seats for the game.

Students from TEEROC, Designed 2 Dance and Fort Bend Dance Academy along with their chaperones and Council Member Green were honored to participate in the pre-game show by holding the Texas flag on the NRG stadium field. “Seeing the excitement on the student’s faces and watching them execute their role perfectly was a proud moment, states Council Member Green. ” It was amazing watching them see themselves on the jumbotron and enjoying all the excitement that comes with Texans football”. Thank you to Image Net All stars for the t-shirts and the opportunity to enjoy the game. The Astros and the Texans each won their games that weekend too. Go Astros and go Texans!