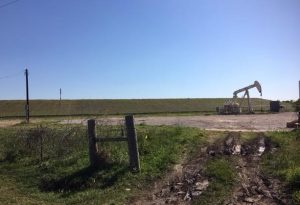 The SHCCC recently engaged with LSLA to challenge the 27.2-acre brine pit’s permit, approved by the Railroad Commission of Texas (RRC) in January 2017 and required for operations to begin at the site. Located just west of the Wildcat Golf Club in South Houston, construction on the massive pit near Buffalo Speedway has been on hold since legal proceedings began in February 2018, when Attorneys French and Dinn filed a 13-page formal complaint with the Railroad Commission on behalf of the SHCCC.

During a public hearing with the Railroad Commission on July 30th in Austin, LSLA clients and witnesses argued that the permit applicants failed to provide timely and proper notice to the City and citizens of Houston on their application, therefore denying due process and public participation on the permitting process, keeping the company’s intents to build the massive pit largely hidden from public view. At least half a dozen community members and others made the 3-hour trek from South Houston to Austin in support of the SHCCC and LSLA’s efforts.

An alliance of 25 civic clubs and homeowner associations dedicated to the welfare of South Houston residents, the SHCCC has advocated for green development that can create economic opportunities while reducing exposure to environmental hazards in this historically underserved environmental justice community. In powerful testimony provided to the Railroad Commission in July, long-time resident and SHCCC founding member Vivian Harris explained that the proposed brine pit poses the same kinds of concerns that prompted the initial formation of the group in 1993. “We formed that coalition so that we would all have a collective voice to try to make things happen in our community, and that’s what we were all about. That’s what we’re still all about, but we are still being dumped on,” shared Harris.

In long anticipation of positive economic growth, the community has worked hard to bring infrastructure improvements to their District in cooperation with the City of Houston, with special attention paid to landscaping and connectivity. The largely undeveloped west side was recently opened up with an extension of Buffalo Speedway between Holmes Road and West Orem Drive, and a rare bridge spanning the rail line on Holmes Road will further connect the neighborhood to the Texas Medical Center. In contrast to the industrial development dominating the area east of the Wildcat Golf Club, residents believe that a 27.2-acre open brine pit on the west side of the course would threaten any hard-won equitable progress with an unwelcome risk to the community’s health and environment.

Holding up to millions of gallons of crude mixed with salty brine, brine pits are typically used in the drilling or processing of petroleum products. While conventional oil and gas activities have been a constant presence in the area since the 1920’s, drilling on the Pierce Junction oilfield has greatly slowed in recent years with development of the salt dome that gave rise to the oilfield. In a new phase of development using the pits for long-term storage of crude oil, the current brine pit would hold and store up to 168 million gallons of crude in an open uncovered pit, allowing evaporation to occur over decades. Risks to neighboring communities include exposure to groundwater contamination, decreased air quality, and salt dome collapse.

Concerned citizen Garrit Leeftink found out about the little-known plans for the brine pit while working on family land that neighbors the brine pit site. Largely untouched, the 19-acre parcel near Buffalo Speedway is home to abundant wildlife including birds, ducks, coyotes, deer and even a bobcat. Part of 600 acres of ranch land originally owned by the Settegast family, Leeftink finds the area “a curious mix of town and country.” After contacting the Railroad Commission about the status of the permit, Leeftink discovered that the brine pit, sited for west of Wildcat Golf Club – an area residents previously thought of as “safe” from industrial development – had already been approved for construction to begin.

Alerted by Leeftink about the plans for the pit, City Council Member Larry Green championed the community’s concerns, pointing SHCCC members to LSLA’s EJ team for help. Newly elected District K Council Member Martha Castex-Tatum has carried on the fight with LSLA, taking time to testify at last month’s public hearing along with Mr. Leeftink and Mrs. Harris. The SHCCC and community members are awaiting a ruling from the Railroad Commission.

Identifying a conflict between state and local oversight, Leeftink sees this as an opportunity for citizens to consider and weigh in with their elected officials on how “one size fits all” regulations may not always work, especially in a state as large and diverse as Texas. Speaking about the community’s concerns, EJ Managing attorney Dinn added, “This community deserves the opportunity to participate in the permitting process, which was denied by the permit applicant who failed to follow basic notice provision to the city. Where you put oil and gas developments (even in Texas) matters, and this location is not suitable for a brine pit as reflected by the community’s support of SHCCC’s permit challenge.”