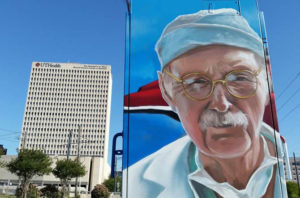 On the corner of Fannin St. and South Braeswood Blvd. is a mini mural to honor the memory of a hero who made his own indelible mark on the Texas Medical Center.

The two artists that contributed to transforming a plain traffic signal control cabinet into a mini mural bearing the iconic image of the late Dr. Red Duke are Anat Ronen and Pilot FX.

Dr. Duke was indeed a one-of-a-kind hero and Texas icon. The John B. Holmes Professor of Clinical Sciences at UTHealth was known for his extraordinary patient care and efforts to train medical students and surgeons. For the mural, the artists’ goal was to capture Dr. Duke’s personality, along with his trademark bottle-brush mustache, military issued wire-rimmed glasses and scrub cap.

“Dr. Duke, a renowned surgeon, was one of the most humble, ethical, brilliant and hardworking doctors for the many who knew him, his hundreds of patients and his colleagues as well as hospital staff,” states Council Member Green. “It is my pleasure to have had the opportunity to have the likeness of this extraordinary doctor painted as a mini mural to be located in the Texas Medical Center where we can say he has been memorialized to be remembered by all who knew and admired him.”

In addition to Green, the public art project has support from the City of Houston Mayor’s Office of Cultural Affairs, the city’s Department of Public Works and Engineering, Houston Arts Alliance, Fresh Arts and the Brays Oaks and Five Corners management districts.

It was the vision of Pilot FX to create a mini mural of Dr. Duke, who was often described as being “larger than life.” Pilot FX collaborated with Ronen to paint the portrait, landscape and images of Memorial Hermann Life Flight® helicopters.