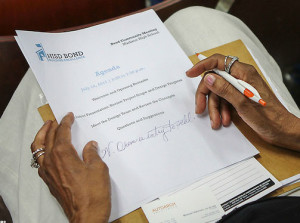 Nearly 40 people turned out Tuesday evening to Madison High School to learn about plans to replace the 50-year-old school with a new $82.7 million facility that will feature modern learning spaces and integrated technology.

“We want this school to be a great school and reflect the best of our community,” said Linda Scurlock, who is a member of Madison’s Project Advisory Team, which has been meeting since last year to help plan the school.

Tentative designs show the front door of the school facing West Orem with a clearly defined entrance that leads into a grand hall that would also serve as a gathering space. The entrance would be flanked by a three-story academic wing on the east and a performing arts space to the west. Athletics would be on the northeast side of the building, behind the academics.

The preliminary site plan follows a two-day design workshop held in May, where the school’s PAT and other stakeholders worked with the architect to come up with design ideas and the orientation of the building.

A traffic study currently is being done to better understand how that site plan could impact traffic flow, especially when students are arriving and leaving.

“We want to make sure when you drive by the building, that it exudes learning,” said Principal Orlando Reyna. He said he was especially excited about how new academic wing would be arranged to showcase the school’s Career & Technical Education programs, such as robotics and agriculture.

Throughout the school, natural daylight and open spaces would help create a welcoming environment and promote visual connections that encourage students to explore and collaborate.

Madison Alumni Bruce Allen was also encouraged by what he saw on Tuesday and is anxious for construction to start. He said a modern school will help ensure students zoned to Madison stay at their neighborhood high school, as well as attract others from the greater Houston area.

Under the current schedule, Madison would start construction by the second half of 2017, with a target opening date for the 2019-2020 school year.