Skip to content
Home/Community, Events, Public Safety/Celebrating Those Who Serve
Previous Next

Celebrating Those Who Serve

Homemade chocolate candy clusters, pizza, sandwiches, strawberry cake, and the hands that prepared this meal waited in the “roll call” room inside the Southwest Substation. Police offers began trickling in, ready for the assigning of duties and were pleasantly surprised by a gift of food, delivered by the Sisters Who Care. 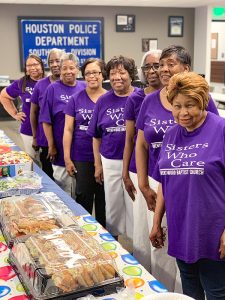 Before beginning their daily patrol within the Five Corners District community, officers lined up at the serving table, grabbing a bite for the road and thanking the Sisters for their act of service during National Police Week.

May 15th became the designated National Peace Officers Memorial Day in 1962, and since then has become a week-long observance, complete with memorial services remembering over 21,000 officers who have fallen in the line of duty in the United States since 1791.

Houston’s own Harris County Sheriff’s Office Honor Guard traveled to Washington D.C. to join 30,000 law enforcement officials from around the country for National Police Week ceremonies. Representing the third largest county in the nation, this unit of 63 peace officers volunteer their time to commemorate fallen officers. They took part in the Candlelight Vigil, and the 38th Annual National Peace Officers’ Memorial Service, recognizing fallen officers while also saluting and showing support for their family members present. 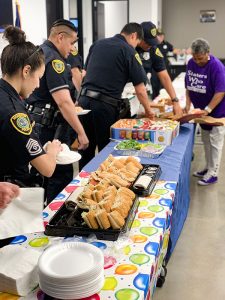 Houston holds its own Annual Police Week Memorial Service, occurring Friday, May 17th. The ceremony begins at the Houston Police Officers Memorial in Buffalo Bayou Park, where a roll call names the 114 officers who have given the ultimate sacrifice. A candlelight vigil, a 21-gun salute, and a fly-over by HPD police helicopters will mark the occasion, as described on the Houston Police Officers Union website.

The department generously opened its doors to the Sisters Who Care, whose mission is to “motivate African-American women to join with other Southern Baptist Convention sisters in fulfilling the Great Commission,” as stated on the Women’s Missionary Union website, the umbrella organization that they function under.

Throughout the year, this women’s group, led by President Karen Byrd-Simpson, organize missional efforts to benefit the Brentwood community and beyond. The group hosts a shoe drive to contribute to the non-profit “Soles 4 Souls,” which sends shoes to families in poverty and victims of natural disasters around the world. For Thanksgiving, the Sisters collect donations to create 60 Thanksgiving baskets for distribution around the Brentwood area, including families of children in local elementary schools, or victims of Harvey who would not otherwise have a quality Thanksgiving dinner. Every spring, the ladies host a “Pre-Mother’s Day” lunch outing for women ages 75 and up, who may not have family in town on Mother’s Day.

This is the second year that Brentwood Baptist Church’s small group, Sisters Who Care, has reached out to recognize police officers stationed within the Five Corners District. “We came across the suggestion to honor police officers for Police Week in one of our missions study guides,” says Edna Deauvearo, Vice President of the Sisters Who Care and a Five Corners District Board Member. “The Southwest Substation had recently opened, so last year turned out to be the perfect time to start the tradition in this new building,” she explains, as other group members agreed. 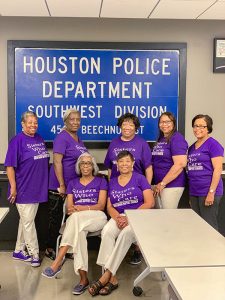 The highly anticipated, state-of-the-art Southwest Substation was opened in September 2017 on Nitida Street. And there was definite cause for celebration; officers now using this $21 million dollar building enjoy an upgrade from their former 6,500 sq. ft. location to a more accommodating 60,000 sq. ft.

The Houston Police Department, funded by the taxpayers they serve and dedicated to the protection of the neighborhoods they patrol, are an integral part of the Five Corners District. The officers at the Southwest Substation value building positive relationships with residents in order to meet their needs. The new police substation itself has a large community room available for free, public use by any groups in the area who wish to make use of the space for meetings or community events. Interested parties simply need to call the station to make a reservation.

As the Sisters in their matching purple shirts carried in boxes of food and treats enjoyed by officers and church members alike, a snapshot of true community spirit emerged. By way of sharing a meal, a message of respect and appreciation was delivered to the people who are willing to risk their lives every day to protect the people of Houston.

The HPD substation is located at 13097 Nitida within Cambridge Village Park.