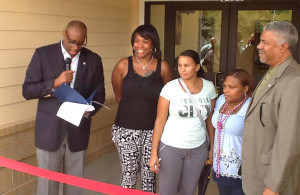 In 2005, Houston welcomed a number of residents into the region due to the aftermath of both Hurricanes Katrina and Rita. While many displaced residents decided to go back home, others decided to stay and make Houston their new home.

Through the generosity of a landowner who donated a large tract of land immediately behind the Glen Iris subdivision for a residential community via the “Oprah’s Angel Network”, Habitat for Humanity constructed 65 landscaped and furnished homes for families that would become the Angel Lane HOA. As part of this single family community’s general plan, four (4) of the original residential lots were not built and set-aside to construct a community center for this small-knit community. The Houston Area Urban League, a United Way agency affiliated with the National Urban League, was charged with this duty. The project had stalled for many years however, the District K office got the project back on track. Earlier this month, the Angel Lane HOA celebrated the grand opening of their new community center.

“I would like to say not only am I extremely excited that this project has finally come to fruition, but I’m overjoyed that the Angel Lane community has their own community center that will be a focal point of their residential community. I was honored to be a part of this momentous occasion,” states Council Member Green.