Skip to content
Home/Community, Events/1,000 students get supplies at back-to-school carnival
Previous Next

1,000 students get supplies at back-to-school carnival 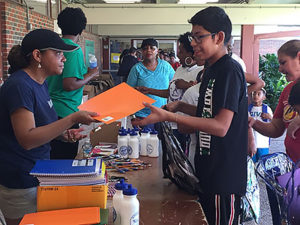 At least 1,000 students were able to start their studies equipped with the right supplies, thanks to the Southwest Back-to-School Carnival held Saturday, Aug. 20 at William P. Hobby Elementary School. The carnival featured rides, food, family entertainment, and backpacks filled with school supplies for those who needed a hand getting ready for the new school year.

Officer Mary Young of the Houston Police Department said the highlight of the day was seeing sunshine on the morning of the event, after three weeks of rain. She said children were lined up for free backpacks and supplies as early as an hour before the event opened.

“I knew then it was going to be a great day,” said Young, who has worked at HPD’s Southwest Patrol Division for the past five years as a community service officer.

“My ultimate goal was to bridge the gap between the community and the police department,” she said, adding that she wanted to present opportunities for local families to interact with law enforcement in a positive way––just as they do in other parts of the city. The next event on the schedule will be to provide a safe trick-or-treating experience in the parking lot of a Southwest Houston shopping center, she said.

Families at the back-to-school carnival expressed their gratitude, Young said, including a mother of four whose children are all attending different schools this year, and a family who just moved here from out-of-state. Students who received backpacks represented not only local public schools, Young said, but also charter, magnet, and home-schooled students.

While many sponsors provided supplies, some donated a total of more than $7,000 to the cause. Sponsors included the offices of Houston City Councilman Larry Green, Senator Rodney Ellis, Texas Representatives Alma Allen and Ron Reynolds, and the Five Corners Management District.

5Cs Back to School Carnival at Hobby Elementary from ev1pro.com on Vimeo.