Skip to content
Home/Uncategorized/The Windsor Village Church: Building The Kingdom of God on Earth
Previous Next

The Windsor Village Church: Building The Kingdom of God on Earth

Irv White attended his first service at Windsor Village United Methodist Church in 1993. He had recently moved to Houston to become a local television news reporter, and was casting around for a church to join. “A lot of people were talking about Windsor, that there was this dynamic preacher over there—a mover and shaker,” White remembered. “Everyone said that they were doing things, they were making a difference.”

The Sunday morning service he attended was packed from wall to wall with worshipers— “busting at the seams,” he said. What he experienced more than justified what his friends had told him. “It was high praise, it was powerful, it was engaging, it was uplifting—any of those words would describe what was going on.”

White soon became a member of Windsor Village, and kept in touch with the church even after he moved to Nashville to take a new job. One day, he received an unexpected call from Windsor Village’s charismatic senior pastor Kirbyjon H. Caldwell, who had a simple question: What would it take for White to join the Windsor Village staff? “You asking me,” White immediately replied. White left the television business, moved back to Houston, and took up a position as Windsor Village’s director of marketing. In 2008, he joined the church’s pastoral staff as an associate pastor.

To understand the transformative effect Windsor Village has on people like White, you have to understand the church’s history. It was founded in the early 1960s as Southmont Methodist Church, with a location at 6000 Heatherbrook Drive and a mostly white congregation. Over time, the Windsor Village subdivision grew up around the church, giving the church a new name. As the neighborhood’s demographics changed in the 1970s and ’80s, so did the church’s. By the time Pastor Caldwell was appointed in 1982 the church had only about 25 families on its rolls, most of them African-American. 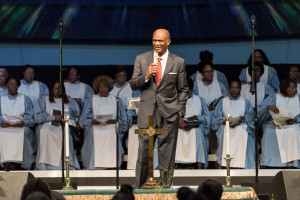 Today, Windsor Village is one of the largest churches in the country, with over 16,000 members, 75 ministries, and an average weekly attendance of 6,500 hundred congregants at its four weekend services. Those congregants drive from as far as Galveston and Huntsville to hear Pastor Caldwell’s inspiring sermons.

“Pastor Caldwell will tell you that he never had any intention of making this a huge church,” White said. “He just came to preach the word, and to take the sanctuary to the street. That’s what he did, and over the course of time people just started flocking to this ministry. It was just about identifying the needs of the community. And the community was ripe for that.”

Windsor Village is now based in the state-of-the-art, 183,000-square-foot Kingdom Builders’ Community Center on West Orem Drive, which anchors Pointe 2.3.4, a 234-acre master-planned community that includes housing, shopping, an HISD elementary school, a YMCA, and a Texas Children’s Pediatrics Center. It also operates the Power Center, a 104,000-square-foot multi-use complex at the corner of South Main and South Post Oak that houses The Imani School, a conference center, and a range of other services.

White said all of the church’s activities flow from its central mission: “We call ourselves Kingdom Builders. You know the Lord’s Prayer—‘Thy kingdom come, Thy will be done, on earth as it is in heaven.’ So as Kingdom Builders we seek to represent everything that Jesus said exists in heaven. It’s about building God’s kingdom here on earth.”