Skip to content
Home/Community, Economic Development, My Five Corners/Supporting Local at “There’s No Place Like NOLA”
Previous Next 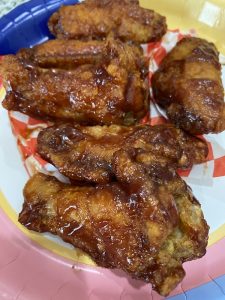 Timothy Mosley didn’t always run two businesses. Prior to 2018, Mosley was simply the proud owner of his construction company, TNB Services. An important part of conducting his business was meeting with clients for lunch; something Mosley did quite often. “I always met with clients in a friendly environment where we could eat and look over blueprints and plans together,” he says.

But the frequent driving, waiting to be seated, and making reservations at various restaurants became a time-sink that Mosely wanted to avoid. “I decided — hey, why not have my own place where I can take clients for some old-fashioned cooking?” In 2018, Mosley opened the original location of “There’s No Place Like NOLA Cajun Restaurant” off Almeda Genoa Rd in the Five Corners District.

Starting the small restaurant not only cut down on the time Mosley was spending on meetings, but served as a form of advertising for TNB Construction. Next thing he knew, “customers started saying that they liked my cooking, and it took off from there.”

“Cajun food is everyday cuisine. People usually eat soul food on Sundays, but with Cajun, there is enough variety for any day of the week, and to fit various dietary restrictions,” says Mosley. “We have flavored wings, catfish, shrimp, po-boys, red beans and rice, jambalaya, and much more to offer, all with a Cajun flavor.” 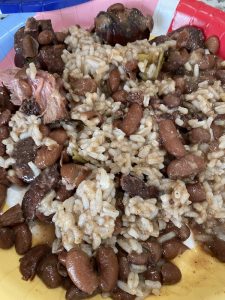 Mosley’s father-in-law, Percy Pichon, was the inspiration for the NOLA (New Orleans, Louisiana) Cajun cuisine concept. Born in New Orleans, Pichon ended up in Houston but continued returning to New Orleans to parade the streets as a Mardi Gras Indian — a tradition that has occurred in New Orleans for over a century. Now, Pichon will put on his extravagant feathered, beaded outfit for the occasional party at Mosley’s restaurant.

By 2019, Mosley was ready to move into a larger building, and ended up leasing a former sports bar at the intersection of Hiram Clarke and West Orem. This new 5,000 square foot space has allowed Mosley to install a dance floor, stage, DJ setup, a full kitchen, speakers, projectors, among other renovations. This building has allowed Mosley to host parties of 200 people, an impressive 185 more people than could fit into his first location.

“We had a new location, invested a bunch of money into the renovations; we were just getting our stride, developing systems, keeping up our quality, food and service,” says Mosley. But once late-February 2020 rolled around, the business started seeing a declining numbers. By March, Mosley says, “We had about eight events lined up that were canceled. When school was in, we were still doing good, but now, we’ve entered a new norm.” 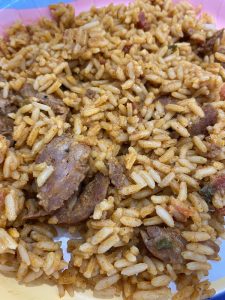 “This Caronavirus is hurting us really bad. We don’t have a drive-thru, and we’re competing against places that do,” says Mosley. “Regular restaurants like us are trying to be inventive to survive.” With social distancing as the new norm for the time being, events are simply not possible, and restaurant patronage has drastically reduced city-wide.

Mosley expresses concern that even when Houston reaches a point where restaurants are allowed to fully open once again, customers used to months of social distancing will simply not come flooding in. “Restaurants that have been here a while, and that people already know, are going to do better. New restaurants – not so much,” fears Mosley.

For now, Mosley is a one-man show at There’s No Place Like NOLA most days of the week, with extra help on weekends if he starts to see orders picking up. “Cooking is the easiest thing in the world. I love cooking,” he says. He plans on expanding his drink menu to help boost his sales.

Next time you’re in the heart of the Five Corners District, make a point of calling ahead of time and placing a take-out order at There’s No Place Like NOLA. Know that your purchase goes directly to support a small business, which in turn helps our community stay strong – all for the price of a shrimp po-boy.