“I’ve always wanted to help people. I want my community to be nice, and receive the same services as everybody else,” says Linda Scurlock, a community member invested in the Five Corners District area since moving into the neighborhood in 1977. For the past 42 years, Linda has proven to be a strong advocate, fighting for policies, services, and changes to benefit her neighbors. 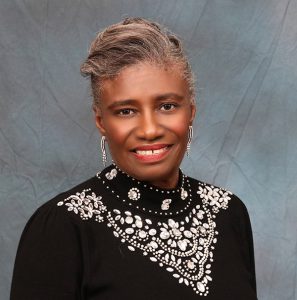 Having taught in Houston ISD for 36 years, with 16 of those at Westbury High School, Linda retired from teaching and devoted herself full-time to activism. “If you don’t say anything, nothing happens. I don’t mind calling out a politician,” she laughs. And with her wealth of experience working in HISD, Linda brings a knowledgeable perspective to the table as she seeks to help local schools.

Raised in Navasota by her grandparents, it was instilled in Linda and her siblings to always do their best and work hard no matter what. “My grandma said, ‘all of you are going to graduate from high school,’ and we did,” remembers Linda. “Before we were old enough for school, she would cut out pictures of chickens from the bags of chicken feed and put them on the wall, and we had to practice counting them,” says Linda.

Although unable to read and write, Linda’s grandmother taught her grandchildren how to count, tell time, how to properly set the table, how to keep a home and livestock, and most importantly, a demonstrated strong moral code. “She is responsible for who I am today,” Linda says, crediting her successes to grandmother’s wisdom and compassion.

Attending University of Houston in the 1960’s, and graduating with a degree in Education, Linda began to use her voice for demanding change. She and her fellow students pushed successfully for UH to offer an African American Studies degree program. “I just attended the 50th anniversary of that program a couple weeks ago,” says Linda.

“I came along in the 60’s and it’s a decade that has stayed with me,” Linda remarks. Naturally she attended when she found out her neighborhood civic club, Keswick Place-Ramblewood Park, was having meetings. It was here that she first got her feet wet in the waters of neighborhood advocacy. “I sat and I listened. I learned about community problems, how to attack them, how to get help,” she recalls.

While balancing teaching and raising her son, Linda’s involvement in her civic club led her to become the president of the group on more than one occasion, as she is currently. But Linda didn’t stop there. Her passion for creating solutions led her to also become the president of the South Houston Concerned Citizens Coalition for seven years. “It was a learning experience. I became more involved in dealing with the City of Houston, and HISD.”

Speaking up on behalf of the community was something much needed as the number of subdivisions increased while the number of grocery stores and amenities decreased throughout the years. Linda describes how Larry Green, District K’s first City Council Member, “worked to try and bring some of those things back from when he was a child. We all saw the change, and we tried to do something about it.”

Upon retiring from HISD, Linda jumped right back into the world of education when she saw a marquee at Madison High School advertising for a community meeting. The result was Linda joining the interview committee for a new principal of Madison, and subsequently joining the Shared Decision Making Committee (SDMC), which brings together school staff, parents, and community members to make decisions about the campus. Since then, Linda has become part of Project Advisory teams in schools such as Lawson Middle that have been beautifully reconstructed. Linda and her teams dig down into the nitty gritty of the school blueprints, ensuring that layouts maintain student safety and practicality, in addition to the aesthetics of the school.

Linda reflects that, “whenever I interview a principal candidate, I ask them ‘where do you see yourself in five years?’” Consistency and commitment are two of the highest goals that the community has sought when looking for new school leadership. Linda has worked to encourage HISD to create beneficial hiring practices when local school principalship becomes vacant.

When Linda became involved with Madison, she started noticing the gaps in extracurricular and academic opportunities that had yet to be implemented. “They didn’t have an honors society, so we collaborated with a teacher who wanted to sponsor it. We donated money for the graduation cords. They also did not have a library. We advocated for a library.”

When Houston schools named after Confederate soldiers were being renamed, Linda was central to the conversation, pushing for naming schools after figures that were central to the community. Through protest, speeches at school board meetings, and organizing a group which arrived by bus to an HISD trustee meeting, Linda and others in the district advocated for Dowling Middle to be named after Carrie McAfee, the first black female principal in Texas. Carrie McAfee was the principal of Madison High. But, this request was dismissed by HISD in favor of the name Audrey H. Lawson, a social worker and educator.

When Linda drives around the Five Corners District area in her daily life, “I keep a pen and paper with me and I report things like vacant lots on the 311 app. I believe that as citizens of Houston, this community should get what the city is supposed to give.” Linda is fulfilling her post-retirement goal of working on behalf of District K – and traveling the world. “I’ve been to every continent except South America and Antarctica. When I travel, I come back refreshed, and ready to continue helping people. I like a good battle,” she laughs.