Skip to content
Home/Community, My Five Corners/Interview with Commander Jonathon Halliday
Previous Next 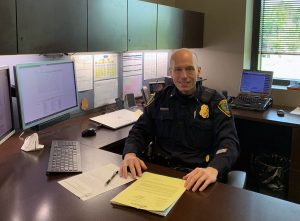 I recently added myself to Houston Police Department Commander Jonathon Halliday’s busy schedule to learn a little bit more about his new role and background. Halliday was promoted to Commander in May of 2020, continuing an 18-year career serving Houston through HPD. This position has brought Halliday into the Five Corners District, where he operates out of the Southwest Substation on Nitida.

Let’s start at the beginning. When did you know that you wanted to be a police officer? What inspired that decision?

I was born in Ohio, but I moved to Atascocita in Northeast Harris County when I was two years old. As a child, I wanted to be a police officer. No one in my family was a police officer; it came from my observations and interactions with the police growing up in the neighborhood. When I was in high school, I would see officers at our local restaurants and hear them talk about their experiences. It seemed interesting. You’re able to help people, and you’re out and about and able to see a lot of things.

At first, I wasn’t sure what I wanted to do in college, but I decided to pursue a Bachelor of Political Science, and work toward becoming a police officer. It was something I always wanted to do, so I knew it was the right decision. Once I was accepted, I went through HPD Police Academy which lasted seven months. I was trained on the penal code, Texas laws, firearm usage, high pursuit driving, and everything you need to be an officer.

From your entry into the profession as a police officer, what has your career looked like since then?

As an officer, everyone starts in the patrol division to build a foundation. Patrol officers are kind of like the jack of all trades. After a few years, they can move on to other divisions, or promote to specific roles such as being a detective, operating helicopters through Air & Marine, joining the Canine Unit, among others.

I remained as a patrol officer for nine years. What I enjoyed the most was being able to interact with the public. From there, I was promoted to Sergeant, then Lieutenant, and this year, in my 18th year, I was promoted to Commander. I didn’t foresee myself becoming a Commander when I first started, and when the Sergeants at the time had been in HPD longer than I had been alive. Time flies; it feels like it was just yesterday that I was in the academy.

Was being a police officer what you imagined it would be?

A lot of it is what I expected, and a lot of what you see on TV I have personally experienced. Between car chases, homicide scenes, and other investigations, I’ve seen things I could never imagine. It’s a shock to see various situations that I had previously never been exposed to. I see people living in very difficult conditions, just trying to survive. It changes your perspective, and helps you understand people to a greater degree.

How would you Describe your role as a Commander?

I’m in charge of the Southwest Division, a 52-square mile area in southwest Houston. I have managerial oversight over sergeants and lieutenants.  I come in the morning, and review what has happened overnight. I monitor crime trends and problems, which could be addressed by our Differential Response Team, or Crime Suppression Team. Differential Response handles business inspections, nuisance abatement, illegal dumping, and other quality of life issues. Crime Suppression goes after robbery crews, and ongoing criminal activity.

I have enjoyed taking on this new role as a Commander. I’m able to influence more people, take on new responsibilities, face new challenges, and keep learning.  Anytime I can come to work and learn something is a good day.

Generally, our 40 HPD Commanders are rotated every 2-5 years, although the decision is up to the Chief. Normally they’ll move among the different divisions, such as Robbery, Property, Burglary & Theft, and many others.

What would you want the community to know right now?

Since I began working at the Southwest Substation in May, Covid restrictions have limited activities that we would normally be engaging in with the community to build relationships. Typically, we would hold events such as community meetings, but we haven’t been able to do that yet. In addition, when officers have to be quarantined, this limits us even more. The time it takes to respond to calls goes up. It can be frustrating for citizens and a strain on our resources when we have to prioritize calls.

However, on behalf of HPD, we want the Five Corners District to know that we’re always going to be here for you. This is a difficult time, but we’re working hard and always trying to do better. Never hesitate to call us if you need help. We’re here to serve the community.