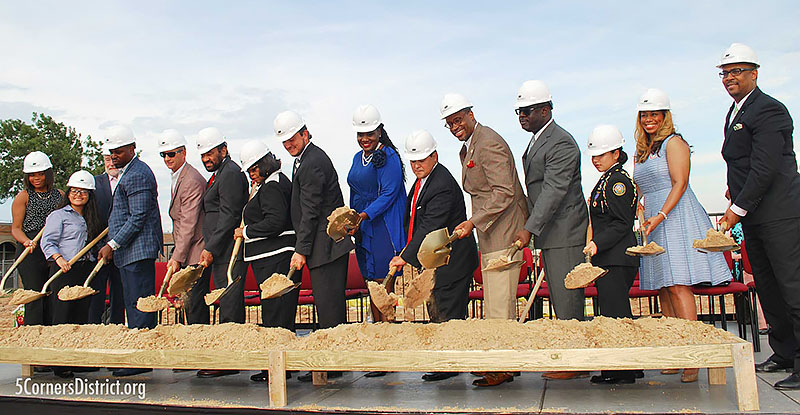 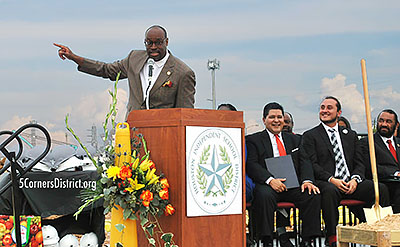 With 21st century technology and flexible design, the new $94 million Madison High School building will challenge students’ imaginations and prepare them for college and careers, said Wanda Adams, president of the Houston Independent School District (HISD) Board of Education, at a ground-breaking ceremony Thursday, August 24.

Construction had already started earlier this summer on the site where the school’s athletic fields used to stand, and a new parking lot across the street on White Heather was completed in time for the festivities.

The new two-story building will face West Orem. Its foyer will double as a dining commons area while providing natural light. The school entrance will be bounded by three two-story academic wings on the east side and performing arts and community spaces to the west.

The gym and athletics area will be located on the northeast side, along with a new competition swimming pool. Adams thanked community members and business leaders who were instrumental in raising the additional $3 million required for the pool.

Construction is expected to be complete in late 2018, and Phase Two of the project will involve demolition of the old building to make way for new athletic fields. 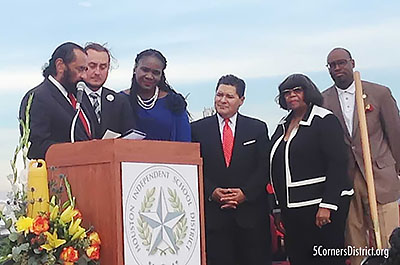 “We are grateful for this new chapter in Madison’s history,” said Madison High School Principal Orlando Reyna, adding that the school is committed to more than just graduating students, but also aims to develop active citizens.

“A building does not make a school,” said HISD Superintendent Richard Carranza. “However, it sure is nice to have a $94 million building to deliver what students need for a 21st century education.”

“You will not go underserved anymore,” Carranza added.

Other alumni who spoke at the event included Moran Norris, class of 1996, who served 11 years in the National Football League playing for teams like the Houston Texans, New Orleans Saints, Detroit Lions, and the San Francisco 49ers. Adams pointed out that Norris is committed to helping the school without fanfare. She said he has provided 200 backpacks full of supplies for entering freshmen every year, given weightlifting equipment to the athletics department, and has donated $15,000.

Nicole Holmes Robinson, class of 1990 and a former Miss Madison, talked about the items that will go into the time capsule in the new building: a golden brick to symbolize respect for the principals, and sentimental items to represent every department in the school. The capsule will provide “a comprehensive look at who we are today,” she said. 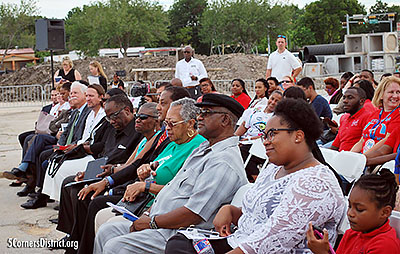 Houston City Councilman Larry Green of District K, a 1983 Madison graduate, amused the crowd with stories of skipping science classes with his high school buddies, and gave a shout-out to his retired science teacher in the audience.

Green praised the concept and design of the new building, created by Morris Architects (a Huitt-Zollars company), and said he looks forward to the school moving forward in both construction and in academics.