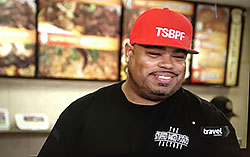 In December 2016, just weeks after opening the Five Corners location of The Stuffed Baked Potato Factory, Michael “Moe” Moore welcomed the Travel Channel and its cameras to his original location on Martin Luther King Boulevard.

The channel was filming a “Stuffed” episode for its “Food Paradise” show. The episode featured The Stuffed Baked Potato Factory’s “Swamp Monster” stuffed potato (chicken, shrimp, crawfish, sausage and etouffée sauce) and “The Beast,” which tastes like a bacon cheeseburger on a baked potato.

Viewers learned from the show that the potatoes are baked skinless and then broken down into the containers before being layered with Moe’s Magic Dust, butter-infused with more Magic Dust, and then cheese and all the other toppings, depending on what you order.

“I’ve patiently waited and worked eight years for this opportunity and I must say that it is an honor,” Moore posted on social media.

A crawfish contest in 2012 led to Moore creating a special blend of seasonings, which then led to the marketing of Moe’s Magic Dust seasonings and eventually to The Stuffed Baked Potato Factory, where you can buy the seasonings, as well as Moe’s Jambalaya Rice and Moe’s Barbecue Sauce. 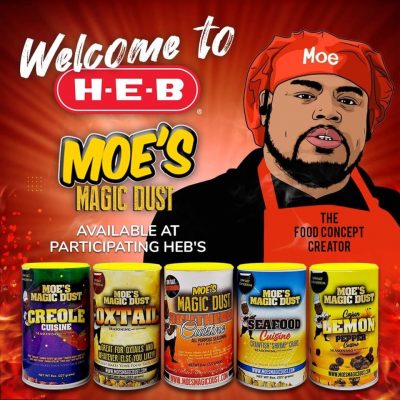 And he ships all over the world. But, as any Texan knows, getting into H-E-B is hitting the big time.

H-E-B, one of the largest retail employers in Houston, operates more than 300 stores in over 150 communities across Texas. Moe’s Magic Dust is available in dozens of them, from Houston and its suburbs to central and East Texas.

“Getting into H-E-B is a great accomplishment, but staying in H-E-B is an even bigger goal,” Moore said, encouraging the local community to “buy the product and spread the word.”

After first searching without success in the spices and seasonings aisle at our local H-E-B, we found Moe’s Magic Dust Southern Cuisine All-Purpose Seasoning and the Moe’s Magic Dust Oxtail Seasoning in the Rice & Beans/Cajun Dinners aisle. The Moe’s Magic Dust Creole Cuisine Seasoning was out of stock at that particular store, but the oxtail seasoning promised it was great for oxtails — “and everything else you like!”

On the Southern Cuisine seasoning shaker, you can read about how it took a year of research for Moore to perfect the blend.

What is special about Moe’s Magic Dust seasonings?

According to Moore, the seasoning is like no other. First of all, it’s low in sodium and salt. Featuring a “fabulous” blend of herbs and spices, the seasonings taste differently on each dish you prepare, never compromising taste or quality and without overpowering the food.

“We really have taken the science out of you trying to blend seasonings for that tasty dish,” Moore says on his website, https://moesmagicdust.com.

Moore, who attended and played football for Westbury High School, said he had an entrepreneurial spirit from early on in life. When his football playing ended after a transfer from one university to another, he went on to start a record company, which boasts a catalog of some 300 albums on which he said he still earns royalties.

While he moved on to recorded music and then restaurants, football and the local community remained close to Moore’s heart. Moore dedicated the his restaurant at Hiram Clarke Road and West Fuqua Street to Coach Ray Seals of Madison High School, who had been head coach and athletic coordinator.

Moore said he expanded into 5 Corners in 2016 to take advantage of a “great opportunity” to expand his business.

He found a restaurant space that only needed a few minor adjustments for it to become the second Stuffed Baked Potato Factory, featuring gigantic dishes with a baked potato base — and then layers and layers of meat, cheese and other toppings, requiring names like “The Trash Can.” 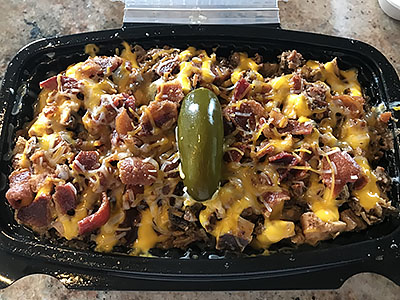 “It was a good spot,” Moore said, because he wanted one that people could visit more easily from Pearland (where he lives), Missouri City and, of course, the southwest Houston area.

About 45 percent of the customers at the Five Corners location use the drive-thru, Moore said, but — unless you are familiar with all the dishes — you may want to go inside and consult with the helpful employees, who will fill you in on all the various choices from “The Cowabunga,” featuring hickory-smoked chopped beef, butter, cheese, onions and green chives, to “The Super Freak,” which features chicken and shrimp in a creamy alfredo sauce.

Confused? Try “The Confused,” which allows you to sample two different meats. The “Plain Jane” is for those who like their baked potato sans meat but smothered in butter and cheese.

And, of course, don’t forget to ask for extra Moe’s Magic Dust.