A new public art project is helping the Houston firefighters of Station #59 remember and honor their fallen colleagues.

The mini mural that covers the traffic control electrical box was designed by the firefighters, and the inscription on one side says, “Never forget. May 31, 2013″––the date four firefighters from another station were killed battling a motel fire in Southwest Houston.

The side that faces the busy intersection at 13925 South Post Oak shows a bulldog wearing a firefighter’s helmet and bears the date the station was established in 1967.

Houston City Councilman Larry V. Green of District K noted that the designs submitted by the firemen were “pretty cool” before he presented proclamations to the Station #59 crew on Tuesday, January 26. Other proclamations acknowledged the artist, Adam Socie, and UP Art Studio for helping make the mini mural happen.

“I’m very excited that our council office is bringing civic art to District K. Moreover I’m thrilled to work with UP Art Studio and Fire Station #59 to bring civic art to our Houston fire station and the Five Corners District,” Green said. “We appreciate the hard work and dedication of the men and women that work at Fire Station #59 and are honored to have the opportunity to work with them on this civic art initiative.”

Firefighter Miguel Garcia was credited with getting the ball rolling as he approached UP Art studio. He and his crewmates wanted a piece of their own art in front of the station after seeing other mini murals around District K.

The pilot phase of Green’s public art initiative has been recognized by the Keep Houston Beautiful Distinguished Service Award, the Houston Press‘ “Best of 2015,” and “Best Public Art Project.”

The project aims to engage the community and transform urban blight by reimagining electrical control boxes as public art. The new work at Station 59 represents the sixth mural completed by Socie, who signs his work as “Pilot FX.” 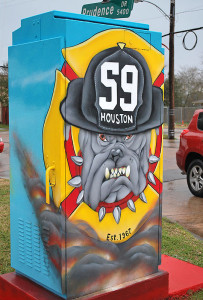 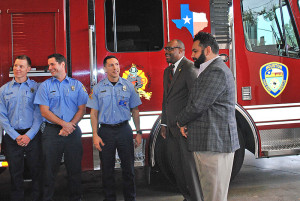