Skip to content
Home/Community, Events/Call for Nominations: 2013 Mayor’s Disability Advocate of the Year Awards
Previous Next

Call for Nominations: 2013 Mayor’s Disability Advocate of the Year Awards 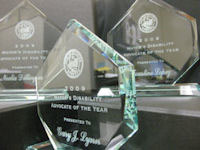 Nominations are being accepted for the 2013 Mayor’s Disability Advocate of the Year Awards (MDAYA) through Monday, September 30, 2013.

MDAYA seeks to recognize and honor the contributions of advocates who, through their volunteerism in the community, have provided a notable effort toward increasing Houston community awareness of issues related to disabilities, are working towards dissolution of one or more barriers to people with disabilities or who are the voice for those who have difficulty or cannot represent themselves.

For nomination forms and additional information about MDAYA, visit http://www.houstontx.gov/disabilities/advocateaward.html.

For more information about the Mayor’s Office for People with Disabilities, visit http://www.houstontx.gov/disabilities/, email mopdmail@houstontx.gov or call 832.394.0814.