Skip to content
Home/Community, Events/Brentwood Youth Perform The Story of Emmett Till
Previous Next

Brentwood Youth Perform The Story of Emmett Till 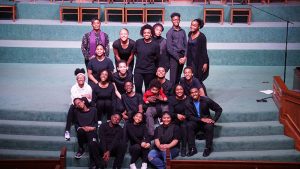 “If we don’t tell the story, who will?” In honor of 2019’s Black History Month, the Brentwood Baptist Church youth in the Five Corners District performed the tragic story of Emmett Till. Entering the church for the first time on a Wednesday night, I was greeted with warmth and hospitality by all. I spoke with Youth Minister Reverend Mary Frazier, who led me to the sanctuary, with pews already filling, to watch the play.

Joe Palmore (or “Joe P.”), founder of ACTing Up Studios, wrote and directed the play, “Till We Rise: A Story About Emmett.” ACTing Up Studios offers youth programs focusing on poetry, theater, character development, and more, so that “students learn values and positive behaviors while they explore their unique talents and interests.” Taking the stage before the performance, Joe P. said his goal with ACTing Up Studios is to “bring in professionals in the field to work with the youth, and create something excellent in the name of God.” 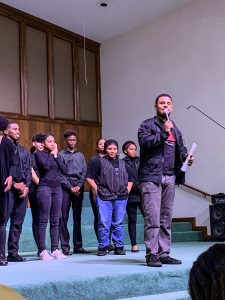 “A lot of people know the name, but not the actual story of what happened to Emmett Till. We’re not just highlighting the bad; we want to tell who he was, what happened, the impact that it made on America, and how it made changes for the people sitting in here today,” Joe P. explains to the audience.

The youth beautifully retold the sobering story of 14-year-old Emmett, an African American child who was killed and mutilated by white Mississippians in 1955. The reason? He was blamed for whistling at a white woman, who in court went further, claiming that Emmett had been aggressive toward her. It was years later that she admitted that she had in fact lied in court. Upbeat Motown music during scene changes contrasted the appalling historical events being acted out on stage.

Braelon Tilmon played Emmett Till, and Rachel Davis played Mamie (Elizabeth) Till, Emmett’s mother. Rachel put herself in Mamie’s shoes, a mother who had been hesitant to let her son travel from Illinois to the deep south, and whose worst fears had become reality. Mamie’s bold decision to keep her son’s casket open at his funeral, revealing the brutality of racism, was a pivotal moment in the Civil Rights Movement that fueled the fire for change across the country. 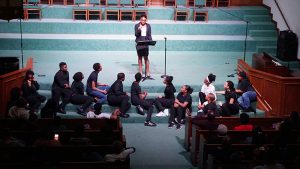 Black history education is not limited to February at Brentwood. “Some things have to be kept in the forefront, not because we want our kids to be fearful; we want them to be aware of their history,” says Edna Deauvearo, active church and community member. She explains that teaching about past and current events occur year-round, beginning in January with the “Elder Series,” featuring speakers who lived during the civil rights movement, sharing their perspectives and insights. Pastor Ratliff also invites speakers throughout the year involved in civil rights activities, among other ways of keeping the church knowledgeable and relevant. Every other year, Reverend Frazier takes middle and high schoolers on a memorable and hands-on experience: a tour across the country, visiting locations significant to the abolishment of slavery, and the birth of civil rights.

A huge variety of ministries define the history and current mission of Brentwood. The church provides housing for people with AIDS on their campus, a mission that began in the late 90’s, when society was fearful of those with AIDS. Overriding the controversy, Brentwood stayed firm in their message that “These are God’s people, and they need to be treated with dignity and respect,” remembers Deauveauro. In the aftermath of Hurricane Katrina, the church set up a relief center for Katrina refugees, and when Harvey hit Houston, Brentwood provided supplies and food for Houstonians in need. 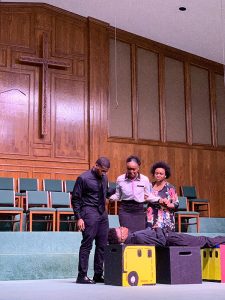 Not only does Brentwood serve the community through partnership with the Houston Food Bank, gifts and school supplies for children of incarcerated parents, scholarships for youth, and a great deal more, Brentwood is one of few churches to own a community credit union, filling the need for a bank in the community.

Brentwood has been an integral part of the Five Corners community since 1965. The Brentwood community began as a primarily white neighborhood, and Brentwood Baptist first met in members’ homes. Over time, the demographics of the area changed, and the congregation built its first building, the present-day sanctuary, which is used for the youth today. In 1980, current Pastor Dr. Joe Samuel Ratliff was installed, with his emphasis on the love and forgiveness of God rather than the traditional “fire and brimstone” exhortation. Under Ratliff’s leadership, Brentwood became Houston’s first predominantly black megachurch. Now, between 5,000 to 6,000 of Brentwood’s members make the drive from outside, and from within the Five Corners District every Sunday for services. 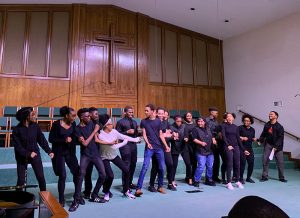 Sitting in the historic sanctuary, I clapped along with the congregation as the youth actors and actresses took a bow, signaling the end of their performance, but not the end of the message that they conveyed. “It’s a teachable moment in today’s society. Unless parents tell their children what happened, a lot of them don’t realize the sacrifices that people have gone through to give them the opportunities they have,” Deauvearo says. As the anthem, Lift Every Voice and Sing proclaims, “sing a song full of faith that the dark past has taught us / sing a song full of the hope that the present has brought us.”