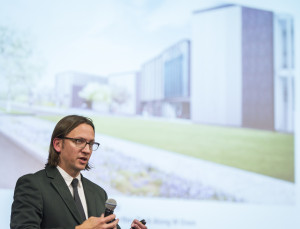 When James Madison High School opened its doors in 1966 on the corner of West Orem and White Heather Drive, it was intended to educate only juniors and seniors. Today it serves freshmen and sophomores as well—over 2,000 students in total, far more than the school was ever intended to accommodate. Although more facilities have been added over time, Madison remains one of the most crowded schools in HISD, which makes it well overdue for a new building.

Fortunately, that’s exactly what’s in the works. Earlier this month, dozens of Five Corners community members packed into the Madison auditorium to attend HISD’s second public meeting about the new school, which is scheduled to open in 2019. With initial planning finished last year, the school is now in the design phase. Large poster boards displaying proposed designs for the new school were set up around the auditorium, with a scale model of the building also on display.

The building is being designed by acclaimed international architecture firm Morris Architects, which was founded in 1938 and has been responsible for countless iconic Houston buildings, including the Astrodome. Like all new HISD buildings, the future Madison will meet certification requirements for Leadership in Energy and Environmental Design (LEED). It will be built primarily of masonry, concrete, glass, and metal, giving the school a clean, contemporary look. 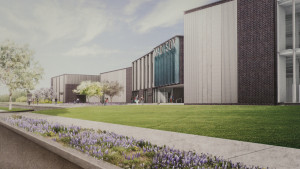 In addition to a new performing arts center, the expansive, two-story building will be divided into three wings, each with its own “learning neighborhood” devoted to a particular academic or technical area. “In that way it’s similar to college, where you have a large campus, but within that you’re in an area dedicated to a certain subject,” explained William Truitt of Morris Architects. Each neighborhood will have its own “learning commons”—a gathering point for students and faculty. “One of the things that’s really important for us as designers is to create that kind of informal public space, to create a sense of life and care,” Truitt said. He emphasized that every classroom will have windows, and that the school will be designed to maximize natural light.

Unlike the old Madison, which faces White Heather Drive, the new building will front the much busier West Orem, giving the school a higher profile to passing motorists. “Today, if you drive down on West Orem, you don’t even notice that there’s a school here, especially at night,” Truitt pointed out. “That will dramatically change when we have a school that is 50 to 90 feet from the street.” 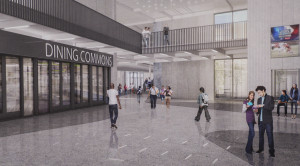 Linda Scurlock, a Five Corners resident and member of the HISD’s Project Advisory Team, said she was happy about the school’s increased visibility. At past meetings, she and several other PAT members had advocated for a more prominent school entrance. She was glad that the architects responded to her concerns by giving greater emphasis to the entrance in their current design, although she believed there was still work to do. “We want a grand entrance that isn’t overshadowed by the rest of the building,” she said after Truitt’s presentation. “If I’m coming down the street, the first thing I want to see is the entrance.”

Councilmember Larry Green, a Madison alumnus, was also in attendance at the presentation and expressed optimism about the project. “It’s very exciting,” he said. “It’s long overdue—the building is 50 years old. At the same time, we understand that the building we build will need to last another 50 years, so we’ve got to get it right.”

The third and final public meeting about the new Madison will take place sometime next year, towards the beginning of construction.