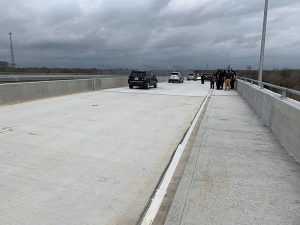 The sound of trumpets and drums marched through the air, welcoming those gathered for this highly anticipated ribbon-cutting ceremony in the Five Corners District. Madison High School cheerleaders held doors open for guests entering the hospitable Brentwood Baptist Church, where the ribbon-cutting was held due to inclement weather. As the ceremony began, the Madison High band and dance team paraded into the ballroom, and led onlookers in the Star Spangled Banner. Pastor Joe Ratliff marked the occasion with prayer, thanking God for “the improvements, advancements, and unity of Houston.”

In November of 2016, a ribbon-cutting was held to celebrate the opening of a new strip of Buffalo Speedway from W. Orem to Holmes. However, with the dead-end at Holmes, there was still a significant gap in Buffalo Speedway which caused motorists to make a three-mile detour in order to pick back up on Buffalo Speedway north of Holmes.

The final phase of this infrastructure project was what governmental officials and community leaders gathered to recognize this week: the opening of Buffalo Speedway’s last missing piece, creating a continuous route with no need for detours.

Solving this problem was something that had been on the table for years, but for which there was not adequate funding available. It was the late City Council Member Larry Green who pushed for this project to begin in earnest. The project came under the wing of Rebuild Houston, through which, as Mayor Turner describes, “money is being directed to critical infrastructure projects.” The mission of Rebuild Houston is to enhance safety through improved drainage, to improve streets, and improve mobility. In describing the improvements associated with the $7.7M grade separation, Turner is confident that “economic revitalization and enhancement for the area will all come as a result of this particular project,” and other infrastructure work being done around the 5 Corners District.

Ease of mobility and improved infrastructure are highly valued in the Five Corners District, and in the overall District K. “If you’ve driven through the neighborhood lately, you’ve seen the work that’s taken place,” Councilmember Castex-Tatum states, citing examples of road expansions, median creations, and bike lanes. “You’ve seen the progress on our Bayou 2020 trails. We will complete those around May, and we will celebrate again!” The Madison High students were personally impacted by another recent community development; Madison celebrated a new $94M building that opened last fall. Students at Lawson Middle School also started school in their modern $66.2M facility. With resounding applause, Castex-Tatum affirmed, “These new improvements will spur millions of dollars in development in our community. [These] are critical steps in advancing mobility in our district and our city.” 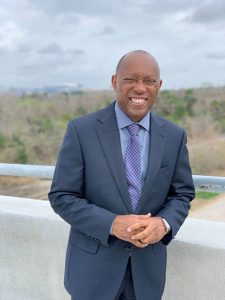 “This is a great group of people. We have all been working together so much in the community and there are so many projects for us to look forward to,” Castex-Tatum reiterated as she thanked these critical parties who have supported this project, including: Mayor Sylvester Turner, Council Member Mike Knox, State Representative Alma Allen, Council Member Amanda Edwards, Eric Dargan of Houston Public Works, board members of the 5 Corners and Brays Oaks Districts, representatives from TIRZ 9 and 25, TxDOT, and James Construction, the contractors who built the grade separation. “We are headed in the right direction, District K,” she concluded.

As put by Mayor Turner, this is “what happens when you have council members who are laser-focused on their district, when community activists and stakeholders take hold and say, ‘this is what we need for our area,’ and in the end it has finally happened.” Speaking from the stage of the church ballroom, with a picture of the new bridge projected behind him, Turner jokingly adds, “It’s a great day to be on the bridge.”

Fortunately, the rain held off long enough to allow attendees to visit the new bridge. Parking on the ramp, and walking to the topmost point of the overpass, NRG Stadium and the Astrodome were in full view. Government officials, policemen, and community stakeholders alike observed the fruits of years of hoping and planning. Through the collaboration of the people mingling and enjoying the view, gaps continue to be bridged in the Five Corners District.